Thanksgiving usually features a meal to spend time with family 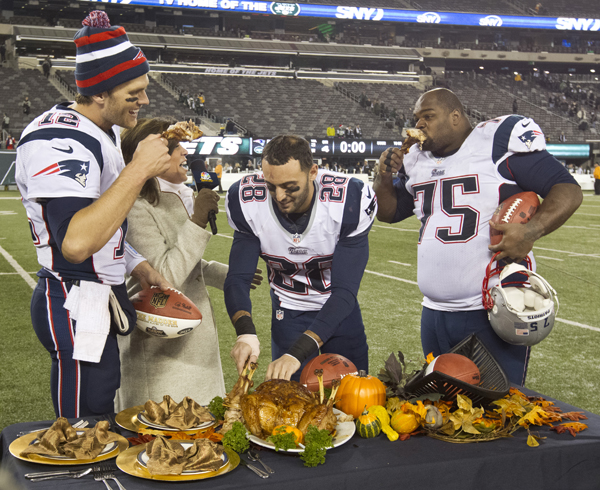 With Christmas decorations popping up in stores all over the country as early as September people could say that Thanksgiving is often glossed over on any important holidays list. Thanksgiving is important as it emphasizes family time over a big meal. What about a big game?

Many on Turkey-Day like to have football, one of America’s most popular sports, accompany their big delicious dinner. Turkey Day football is considered by many a tradition and the NFL has embraced it. Two teams have home games that day, the Detroit Lions and Dallas Cowboys. Those games are followed by a 3rd game which is random. Why is football so popular on Thanksgiving? Why do the Lions and Cowboys have home games that day?

Football has been around since the 1850s and the first Thanksgiving Day football game took place on a cold Philadelphia afternoon in 1869, the match was between the Young America Cricket Club and the Germantown Cricket Club at Germantown. The tradition extended to the high school level as Boston Latin School and English High School of Boston played on Thanksgiving of 1887 and created the longest continuous Thanksgiving Day rivalry.

The NFL was established in 1919, and one year later they didn’t want to be left out, so they held the first NFL Thanksgiving game on November 25, 1920. According to The Professional Football Hall of Fame in Canton Ohio, there were 6 games that day played by teams that are now defunct. 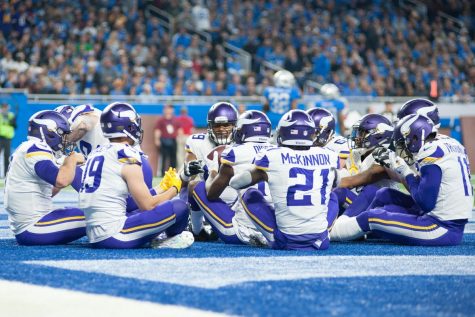 (Photo courtesy of SB nation) The Minnesota Vikings celebrate a touchdown by mimicking a Thanksgiving dinner at Ford Field in Detroit.

There was no set formula as far as what teams or how many games were played that day. The NFL was changing drastically at this time too with many teams coming and going. The Detroit Lions were established in 1934 and owner George A. Richards decided to play on Thanksgiving to attract more fans. This worked due to Richards’ marketing awareness and the fact that Richards owned a radio station affiliated with NBC and had the game broadcast to 94 stations across the country.

(Photo courtesy of sportingnews.com) A full house at AT&T stadium in Arlington TX, watch the Cowboys’ starting lineup being announced on the jumbo-tron with a festive background.

The NFL gave the Arizona Cardinals a shot at replacing the Cowboys on Thanksgiving in 1975 and 1977, but this failed as both times the Cardinals were pounded by their opponents. The All America Football Conference (AAFC) and American Football League (AFL) had games under no set formula until the AAFC disbanded and the AFL merged with the NFL.

This continued except for 1940 to 1945 where no games were played due to World War II. In 2006 ,the NFL decided to add Thursday Night Football to its list of primetime games. The first Thursday Night Football broadcast was on Thanksgiving of 2006 with the Kansas City Chiefs Playing the Denver Broncos at Denver. This third game has no set formula as far as which teams play.

This year the first game is the same as last year with the Detroit Lions hosting the Chicago Bears renewing their Thanksgiving and division rivalries. The Dallas Cowboys host the Buffalo Bills, and for the later game the Atlanta Falcons play the New Orleans Saints in Atlanta.