Fortnite: Is the Crossplatform Unfair?

Fortnite. We all know it pretty well, since its almost everywhere. But did you know how unfair it could be with the Cross-platform? 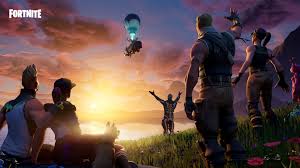 Picture of the video game Fortnite.

Fortnite is well-known for its ridiculously famous gamemode and battle royale. On September 27, 2018, season six came out with a brand new set of toys to play; balloons to enable the height advantage, to a new six shooter revolver, and the ability to glide around in any game mode.

However, out of all of the new updates and add-ons, Sony, a Japanese multinational conglomerate, has allowed Fortnite to be cross-platformed.

As Fortnite becomes more and more competitive, it may show that cross platform, PC players could have an advantage compared to Xbox and PlayStation players. For example, the difference in FPS, or frames per second could produce an advantage that PC players have.

As the competitive battle royale starts to become more popular in the Esports community, the game became more “sweaty,” or more difficult, as more players have started to take the game more seriously. It could be that veterans of the game have taken a new step to become pros in the pro league.
Has Fortnite been harder for players to learn to play the game, or is it equally balanced for new players to play the game with people in their level of skills or experience?

The FPS, for example, has a major difference between XBOX/PS players and PC players. According to Tom’s Hardware, a website that sells electronics and write reviews on video games, you will get a lot more “FPS on a PC (if you have a good one) than a PS4 or Xbox One”.

The limit of FPS on a console is 60 FPS, whereas you can get up to 300 FPS on a PC. Now judge for yourself, which one is better, 60 FPS or 300 FPS? This is why most professional players prefer playing on PC, as it will deliver smooth gameplay with minimal lag.”

From all of the information about the cross-platform, I decided to ask students from the Pahrump Valley High School, that has played Fortnite, with an XBOX. Marty Gryniewichi, a junior and an XBOX player commented that “PC players can build faster and they have a mouse and keyboard, which is accurate with FPS games.”

I have played Fortnite with a PC and an XBOX, so I believe that there is an advantage between a controller and a keyboard, but people have their kind of styles and some people with controllers can do way better than some PC players. The FPS is one of the examples that can and may affect player’s experiences, since some PC players can react more sooner than XBOX/Playstation players.

If there could be a solution to fixing cross-platform, Epic Games may not do anything to change it. Will they change it in the near future, probably not. Cross-platform allows Epic Games to be close connections with Microsoft, Sony, and Nintendo, and allows future plans for upcoming games to be cross-platform.