If you've been in the hallways of PVHS at all in the past few months, chances are you've probably witnessed a kid walking around with a ball and stick toy. 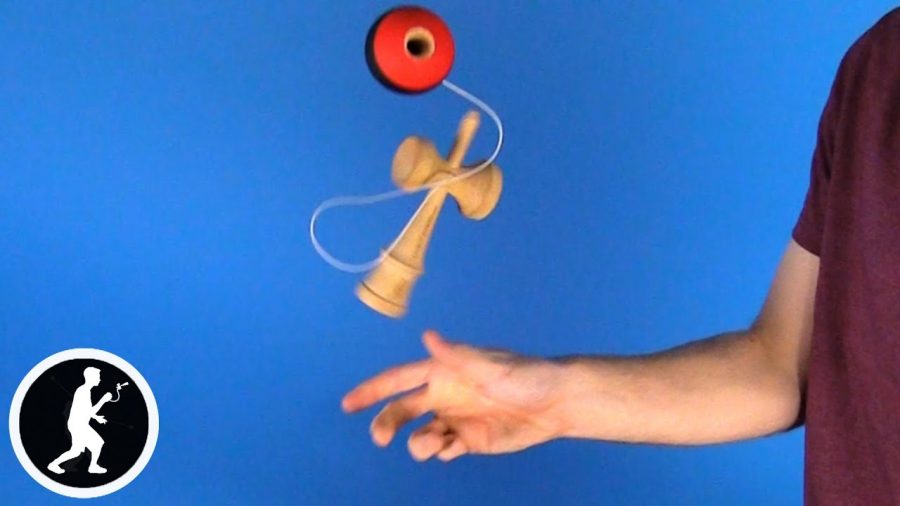 This is an image of the kendama trick “ken flip.“

If you’ve been in the hallways of PVHS at all in the past few months, chances are you’ve probably witnessed a kid walking around with a ball and stick toy. The name of this ancient skill toy is kendama, a Japanese word meaning sword and ball. The kendama has been around since the 16th century and became extremely popular from 2010 to 2014, and we are seeing a comeback.

The kendama is made up of 6 parts: big cup, small cup, base cup, spike, string and the tama (ball), but the toy is generally identified in two parts being the tama and the ken. Basic tricks consist of landing the tama in one of the three cups or landing the ball on the spike.

As you play more and advance your skills you’ll learn harder and more unique tricks. A few of these awesome tricks are ¨ken flip” where you pull the ball in the air and right before you land it on the big cup, you flip the ken 1 full rotation. Another one of these tricks is “Lighthouse“ a balance trick, and you have to pull the ken in the air and land the base cup on the ball and balance it there for at least 3 seconds.

There are over 100 tricks out there to learn, and there are still new ones coming out, so your imagination is the limit. One of the best ways to express your style while challenging your skills and creativity is coming up with your own combos. Combos are multiple tricks stringed together; for example, big cup, spike, earth turn, is a pretty common combo that people do, and  you can create your own combos by throwing your cool new tricks into the mix.

There are some pretty skilled players here at PVHS. The top 3 are Junior Jake Riding, Junior Brenden Loyko, and myself, Junior Angel Rodriguez. Also there are around 20 other students that play kendama, most of which are brand new to the community.

There are plenty of sources and inspiration for getting better for any skill level on social media. My personal favorite is the Sweets Kendamas Youtube channel. They have videos almost uploaded every week and have over 50 in-depth trick tutorials.

Sweets´ videos are very well-made and they have their own pro players including the world champion of kendama, Nick Gallagher, one of the most popular kendama players in the kendama world, Cooper Eddy, and other extremely talented players like Matt Sweets himself to teach the tricks.

Sweets Kendamas is also one of the best, if not the best, brand of kendama in the world. Their kendamas are all hand painted and made in Minnesota, and offer great damas for under 20 dollars. They also offer a more expensive line of what they call “pro models“ which are kendamas completely designed by the pro players on their team.  Their kendamas are top tier, and some of my favorite models and colors are from this company.

Another great company is Analog: they offer amazing kendamas for the price and the best dama that I’ve ever played is from Analog. The wood they make it with is exotic and beautiful, theyre crafted to pervection and they have great balance and stick on the tamas. The only problem with this company is they have very limited stock, so you have to buy from them as soon as they drop a new line of kendama.

The last brand that I recommend is Krom. They have tons of great damas on their website for 20 dollars. They have their exclusive line of kendamas known as “Slay Dogs,“ and they are absolutely amazing, but they do cost quite a bit, around 70 dollars.

My experience with kendama has been amazing, and it’s probably the most addictive thing I’ve ever put in my hands. It teaches you to push your limits and achieve what you once thought was impossible through repetition and practice. So, go pick one up, and see what you can achieve.