Trojan Football Has Everyone Excited!

The Trojans are back! With Trojan football being back, so comes the crowd. With a huge turnout players, coaches, and admin were excited to see school spirit in full force. How will the Trojan crowd carry on through the year at home? 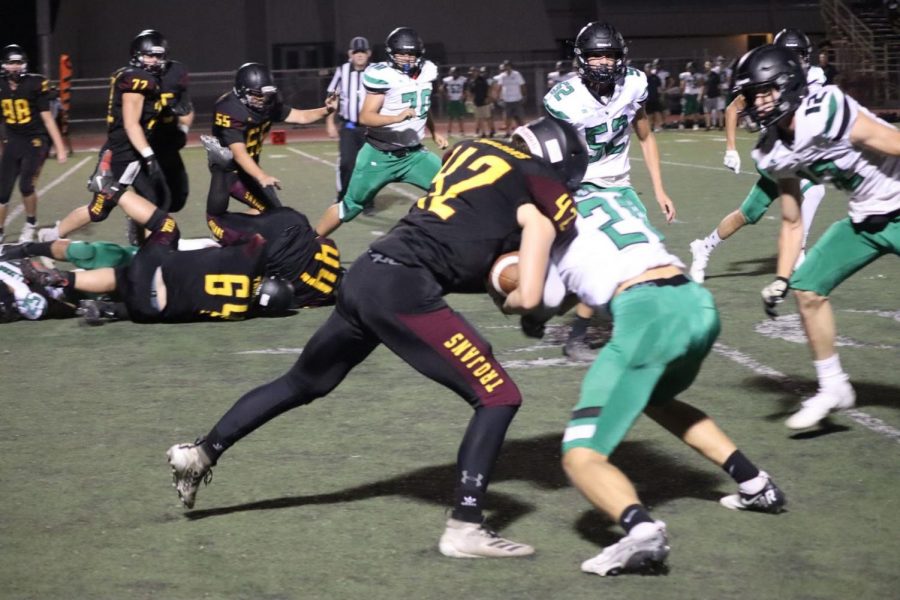 To start the home season the Trojans had to step up against one of the top competitors in the state in the Virgin Valley Bulldogs. This was not a league game but it was a real competition that the Trojans will have to play in state if they want to make it all the way to state champions. This was the first game of the Trojan season and the third of the Bulldog season. The buzz around school that Friday was electric. Everyone was excited and hyped for the game that evening.

It was great to see the turn out of the football game for the first public game in two years. As a school we sold online and in person tickets. We sold a combined 776 tickets at $5 each and generated $3,880 in just ticket sales. This was just the paid tickets, staff members and their children got in for free and was told by Mrs. Jennifer Schockley that this adds about 50 people to the attendance numbers. This was a huge turnout for the Trojans and created great morale for the team. With the first game in two years for most of the players, this definitely got their nerves going and their adrenaline pumping. It also included the first game back in attendance for the student section and the parents. The students were hyped to show school spirit and excited to cheer for their maroon and gold. The yells were loud, the chants were synchronized, and the crowd was having a great time. The Trojans players came out excited with the crowd, they made the crowd louder, and embraced us fully. Everyone was surprised to see the way the Trojan fans reacted. We came in big numbers, with big voices, and a whole lot of energy. Principal Desiree Veloz even went on to say, “The student section brought it.” She talked about the great energy and how she was proud to have such a prideful and energetic Trojan family. The players also loved this energy. Varsity linebacker Austin Sandoval stated, “It gave us a home feeling and it gave us some motivation to play harder than we thought we could’ve.” Sandoval also said the change was great as, “looking up at the stands it’s not bare.” It feels great as a student to hear that we’re positively affecting our Trojan team. It was such a great crowd Trojan Football Coach Craig Rieger said, “We love it, we thank the parents and we thank the students.” He also said, “I think the student section is fun.” All around there was positive feedback everywhere and the fans were commended for a great welcome back to the Trojans.

Now with three home games under the books the Trojans are looking strong as they’re 2-1 at home and putting up big attendance numbers night in and night out. Homecoming and Senior Night were just as loud, if not louder, than the home opener. The Homecoming game put up 781 ticket sales, which was 15 more than the first game. The Senior Night game dropped in attendance to 489 tickets. This drop may have been because the weather was super cold that night and the opposing team certainly did not pose enough of a challenge as the previous two teams.

All of us are in high anticipation as the playoffs are around the corner and the Trojans have a first round bye and are ready to run the table and take a good shot at winning their playoff games.