Why big dogs are better than small dogs

There have been many debates and articles as to what breed of dog is better or what qualities make them more desirable than the other... It’s obviously big dogs! Who in their right mind wouldn’t think otherwise. 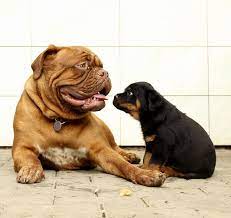 There are many differences between small dogs and big dogs, but these differences must be taken into account when choosing your dream dog. I would like to show you the science behind why big dogs are more friendly than small dogs. When it comes to choosing the proper dog a small dog might be a good choice for a first timer or if you’re just someone who prefers small dogs, a small dog might be your best choice. However, if you want a dog that you can rough house with a protector and a best friend a big dog is your best choice. Now the real question is what does a “big dog” mean? What I mean is that your dog weighs more than 40 pounds which may sound like a lot but hey, they’re called big dogs for a reason, a really good reason why a big dog might be for you is they are very friendly. Perhaps it would be better if I were to elaborate. In recent studies there has been proof that a big dog can be so friendly/gentle due to a genotype called GTF2I.  There isn’t much research around “hyper friendliness in dogs” however it does suggest that it’s linked to Williams-Beuren syndrome which changes the cognitive capacity of who it affects and it makes them unusually trusting and happy such as big dogs.

Since we’re on the topic of hyper friendly dogs there’s also their ability to play/rough house. There are plenty of ways to have fun with your dog whether it’s watching them run around, going on walks, or just any physical activity. Big dogs need exercise so that could potentially be your motivation to become active. While small dogs have their uses they are loud and obnoxious, in a few studies I’ve read they’ve stated “Tiny breeds may be more likely to react defensively because they have more to be afraid of.” This in turn causes little dogs to be aggressive thus resulting in an accident like being bitten or the little dog running away in fear. Therefore Big dogs could even be a good choice for your child, taking care of an animal such as a dog is a big job that teaches responsibility.

When it comes to bonding with a dog it can sometimes be difficult, for example the dog could just not like you, be afraid, or it has trauma. Whatever the case may be, it’s your job to make them happy. It’s known that bigger dogs bond much faster with their owners than smaller dogs, but the reason may be more simple than you think. Fear. Small dogs are very afraid due to their small size. They often are terrified of things many times their size, while, unlike big dogs who try to befriend everyone. However, there are instances where big dogs bark a lot but that’s just the desire to protect their owners but once you get to know them they are sweet angles.

There are many factors when it comes to choosing your dream dog, however you pick and whatever you choose is ultimately up to you.